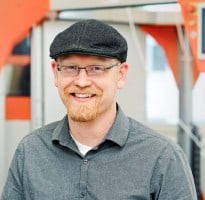 Berlin, January 28, 2016. Renowned American software developer Far McKon is joining Berlin-based tech start-up BigRep, manufacturer and developer of the world’s largest serially available 3D printer. The 38-year old American will join BigRep as new Head of Software effective immediately and will chiefly oversee the future development of the software as well as control electronics for the start-up’s large scale 3D printer BigRep ONE. “We are very proud to be bringing a real original from the US maker and hacker scene to Berlin with Far McKon,“ says BigRep CEO René Gurka. “In his former positions, at MakerBot among others, Far has shown us how to profoundly re-imagine the industry. For BigRep he will now be expanding many of the things he achieved there, only instead of desktop 3D printers he will now be working with BigRep’s large scales.”