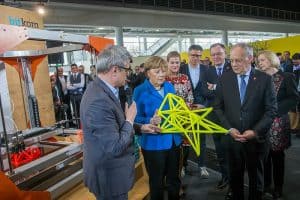 Angela Merkel visits BigRep: Chancellor convinced herself of the high performance of large-scale 3D printing solutions by the Berlin-based technology startup during her traditional tour of CeBIT 2016

Berlin/Hannover, March 15, 2016. In her traditional tour of CeBIT this year, Chancellor Angela Merkel made a stop today at BigRep, the developer and manufacturer of world’s largest serial 3D printer. René Gurka, the CEO of BigRep, was personally approached by the chancellor, whereby he demonstrated the performance of largeformat 3D printing solutions by the Berlin technology startup, much to Mrs Merkel's delight. In addition to the exclusive presentation of the new, third generation of the BigRep ONE, she also looked at various examples and applications of this breakthrough technology that is defining the industry of tomorrow.

René Gurka, CEO from BigRep states: "We are very proud that we were able to welcome Chancellor Angela Merkel to our stand at CeBIT. She could get an idea of the opportunities and potential offered by large-scale 3D printing with respect to the digitalization of the local economy. Current studies conclude that there is still a great need to catch up on the digitalization and digital transformation of the German economy. Our goal is to enable our 3D printing solutions to address this opportunity and to be a significant contributor. " BigRep is the main partner of Bitkom this year, whose breakthrough changes by digitization under the motto "[email protected]" allow you to become familiar with this technology at their stand. Moreover, companies from different areas, which are excellent examples of the digital transformation, are represented at the Bitkom booth.

We cordially invite you to stop by the Bitkom stand in Hall 4, Stand B72 to get a personal impression of large-scale 3D printing technology and to obtain more information about BigRep - until March 18. 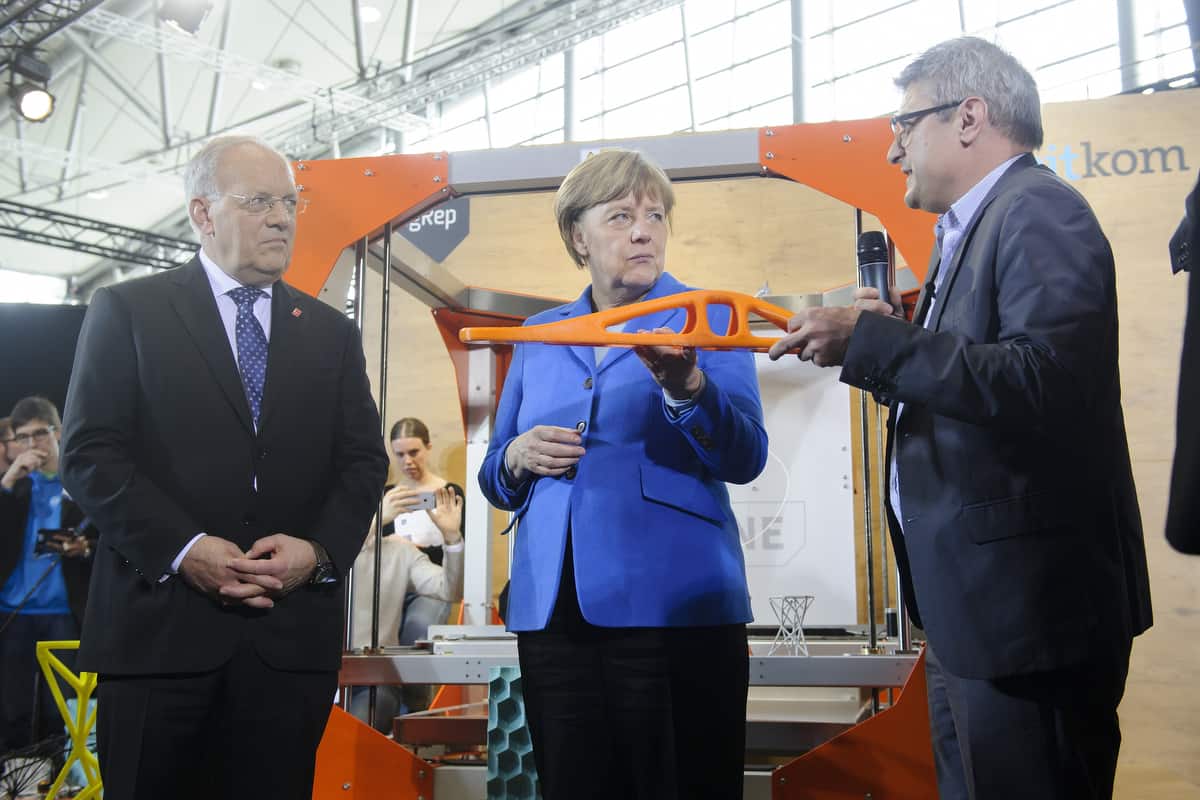 About BigRep:
BigRep is a Berlin-based tech startup and manufacturer and developer of the world’s largest serial 3D printer. Founded in 2014, the company became the market and technological leader for large-scale serial 3D printing in only 18 months, aiming to revolutionize design, prototyping, and industrial production from the core. Prestigious enterprises and institutions from around the world rely on BigRep’s 3D printing solutions. With a volume of more than 1m³, BigRep ONE is the largest FFF (Fused Filament Fabrication) printer currently available on the world market, thus bridging the gap between 3D printers designed for modelling and industrial use. The BigRep ONE.2 received the German Design Award Gold 2016 by the German Design Council in October 2015. BigRep’s ever-growing team of presently 40 employees from ten nations is passionately committed to working on the next industrial revolution. See a sped-up 3D printing procedure with a BigRep ONE here.

Necessary Analytics Marketing Privacy Policy Cookie Policy
These cookies are necessary for the website to function and cannot be switched off in our systems.
PageSense
PageSense's activities, like tracking visitor behavior on websites and targeting specific visitors for A/B tests, generate data that's considered private under GDPR. All of this tracked data is stored with anonymized IP addresses, so you can safely capture, process, and use it without infringing on visitors' data privacy. PageSense doesn't collect personal data from any website visitor who participates in any experiment. The cookie data used to map experiments isn't associated with any IP address.
Technical Cookies
In order to use this website we use the following technically required cookies
Cloudflare
For perfomance reasons we use Cloudflare as a CDN network. This saves a cookie "__cfduid" to apply security settings on a per-client basis. This cookie is strictly necessary for Cloudflare's security features and cannot be turned off.
Youtube
We embed videos from our official YouTube channel using YouTube’s privacy-enhanced mode. This mode may set cookies on your computer once you click on the YouTube video player, but YouTube will not store personally-identifiable cookie information for playbacks of embedded videos using the privacy-enhanced mode.
Google Tag Manager
We track anonymized user information to improve our website.
Active Campaign
This website uses ActiveCampaign (AC) as the designated CRM to track user interaction (trough trackcmp.net) AC cookies are necessaries but no IP or personal data will be saved if you don't convert on one of our forms (cookie visitorEmailAC). We use this to better understand how people interact with our site and to see their journey through the website.
bigrep.com (language)
Contains the current language of the admin and the user.
bigrep.com (Authentification)
Cookie required to allow a user to stay logged in to a web site without needing to submit their username and password for each page visited. Without this cookie, a user is unable to proceed to areas of the web site that require authenticated access.
bigrep.com (session)
These cookies are set by WordPress are used for indication and identification of the logged in user. Those are session cookies.
These cookies allow us to count visits and traffic sources, so we can measure and improve the performance of our site.
PageSense Session Recording
PageSense lets us record visitor interaction with our website in order to improve our services. All IPs are anonymized, no keystrokes are recorded.
These cookies are set through our site by our advertising partners.
Leadinfo
To measure B2B use of our website, we use the Leadinfo solution based in Capelle aan den IJssel. This service shows us company names and addresses based on the IP addresses of our visitors. The IP address is not stored after use.
Bing
We use Bings Ads to promote our company online and use the cookies provided by Bing to record completion of a transaction on our website. You can find out more about Bing cookies by visiting this site: https://advertise.bingads.microsoft.com/en-gb/resources/policies/microsoft-bing-ads-privacy-policy
Decline all Services
Accept all Services