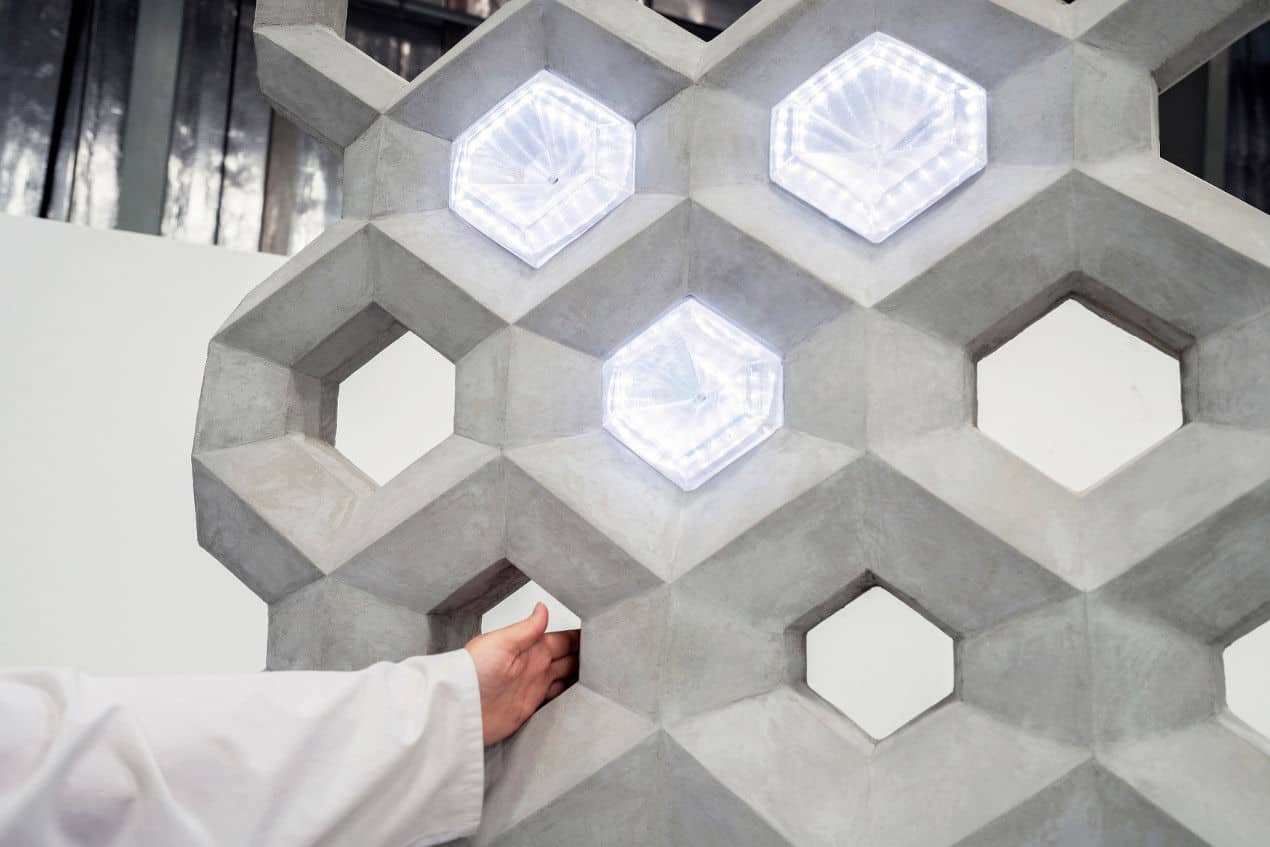 We were thrilled to announce news of the world's first 'smart concrete wall' via a recent article on designboom. Developed by NOWlab, the innovation department at BigRep, the smart concrete wall involved the production of large-scale 3D-printed formwork, enabling an adaptive surface through embedded capacitive sensors.

Jörg Petri, co-founder of NOWlab and lead on this cutting-edge project, said, “This functionalization of a concrete surface is the first of its kind, opening the possibility for any imaginable concrete surface to become a switch.”

The capacitive sensors are activated by the touch of a hand on the outer surface of the concrete wall, turning on and off the functional 3D-printed hexagonal light fixtures in the grid. A video by BigRep on the smart concrete wall visually demonstrates how the structure works, and how it is envisioned to be used in a larger format, such as for wall dividers, facades and interior screens. The smart concrete wall was created to be 2 m in height, 1 m wide, and 10-30 cm in depth.

3D-printed formwork for the wall was printed on a BigRep ONE large-scale 3D printer at Immensa Labs in Dubai, in cooperation with project partner Consolidated Contractors Company (CCC). Ready to be used without additional certification, Petri says 3D-printed formwork enables resolutions that cannot be achieved by direct 3D printing of concrete. With large-scale 3D printing technology such as that of BigRep, companies now have the tools to produce required parts on a grand scale.

Petri and his team developed their know-how in the realm of 3D-printed formwork concrete casting in 2015 and, as 3D Printing Industry published in an article, BigRep was granted an international patent for the technology in April 2018.

As outlined in the designboom story, NOWlab believes that 3D printing can help architects reassert themselves as the master builders of the 21st century, enabling them to have direct control of the development of their designs. Techniques that once belonged to skilled craftsman, and have all but vanished from current building sites, can be reinstated thanks to 3D printing.

Well done to the whole team involved in bringing this world-first idea to fruition! NOWlab continues to work on numerous state-of-the-art applications using large-format 3D printing by BigRep, so stay tuned in the coming months for more exciting announcements and world-first projects.