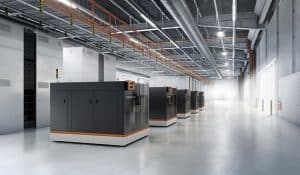 Large-scale 3D printing is on the brink of transforming additive manufacturing (AM) and BigRep’s next generation of engineering-grade printers—discussed in detail during the webinar—set a new standard for the industry. If you joined us for the live webinar, we hope that you enjoyed it, however, if you missed it, you can still watch a recording of the full webinar here or read on for a summary.

Frank Marangell, President of BigRep America hosted the webinar with the help of Abbey Delaney—Marketing Manager.The webinar took guests on a journey from traditional FFF technology and its limitations to BigRep’s next generation of industrial 3D printers: the BigRep PRO and the BigRep EDGE, both equipped with new MXT®—Metering Extruder Technology, which solves two of the fundamental limitations of FFF technology: low throughput and low repeatability.

The question was posed: what makes BigRep different from other AM manufacturers? First, BigRep is application led and customer-centric. That means that value-added, and innovative parts are identified, designed and built before materials and systems are put in place. Presently, new applications are coming on the market from functional prototyping, jigs and fixtures, to end-use parts. The evolution of AM from experimental prototyping to industrial end-use parts happened at lightning speed—and Fortune 500 companies now see the commercial benefits. As companies like Ford, Daimler, Etihad, Toyota and Boyce Technologies—customers of BigRep—turn to AM for faster product development, on-demand spare parts, and futuristic applications; it’s clear that AM has shifted in its utility for the manufacturing sector.

However, with disappointing throughput, and low repeatability, FFF’s functionality beyond experimental design, has until now, disappointed engineers. Moreover, with the relatively low surface quality of printed parts, the industry plateaued—since the commercialization of FFF in the early ‘90s. 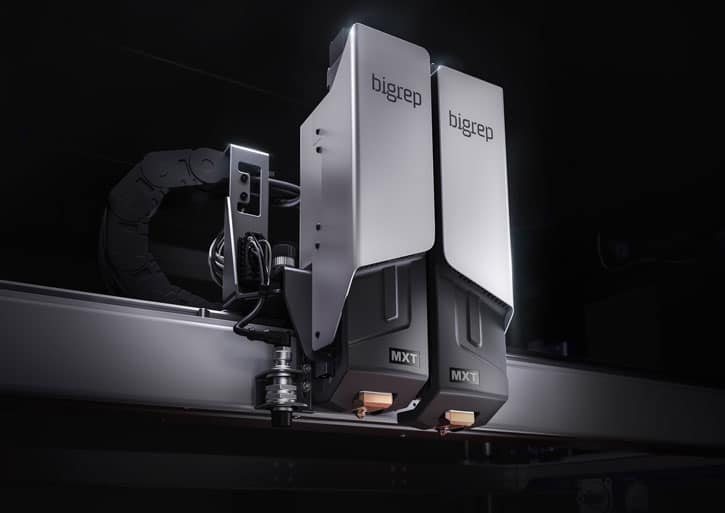 Why the Low Throughput?

So, you have a very fast reaction process—the movement—and a very slow process—the melting. They need to be synchronized to have a precise deposition of the material. Thus, the previous solution was to slow everything down—to a speed that the thermal melting process allowed. Thus low repeatability is a consequence of producing a 3D object without controlling the flow of the material. With many industrial 3D printers, the volume of material extruded is unknown.

BigRep’s MXT® (Metering Extruder Technology) is set to redefine additive manufacturing. When compared to traditional FFF technology, the new innovation by BigRep, is capable of printing speeds of 1,000 mm /s—on the BigRep EDGE and exceeding 600 mm /s on the PRO. Importantly, these print speeds are achievable without diminishing the accuracy of the print. Marangell, who has decades of experience in additive manufacturing, explained in detail how MXT® works and why, with controlled extrusion and a Bosch Rexroth CNC system—a new level of throughput is possible.

Furthermore, BigRep’s materials are developed in partnership with BASF—the largest chemical producer in the world. Engineering-grade materials, now possible on the BigRep PRO extend the possible applications for large-scale 3D printing—once a major barrier in industrial AM. Thermoplastic materials can now be used in both new printers, but the BigRep EDGE, due to be released in Q2 2019 has an even wider range of high-performance materials such as ABS/ASA, PC, PP, and PEI (Ultem.)

New Printers: The PRO and the EDGE

BigRep has set a new standard for the industry, with the release of the PRO and the EDGE, our next generation printers—that respond to industrial demands. Now built with a state-of-the-art Bosch CNC system, enclosed build chambers, and MXT® technology.

The EDGE, which is due to be released in Q2 2019, promises to reshape AM as we know it—with high-performance materials, speed, and precision extrusion. The webinar drew to a close with a ten-minute questions and answers session, with questions rolling in from industry enthusiasts, across the globe.

Frank Marangell is President of BigRep America Inc. and Executive VP of Global Sales at BigRep. He has been operating at the top level of the additive manufacturing industry for over a decade.

Connect with Frank on Linkedin HERE.

Necessary Analytics Marketing Privacy Policy Cookie Policy
These cookies are necessary for the website to function and cannot be switched off in our systems.
PageSense
PageSense's activities, like tracking visitor behavior on websites and targeting specific visitors for A/B tests, generate data that's considered private under GDPR. All of this tracked data is stored with anonymized IP addresses, so you can safely capture, process, and use it without infringing on visitors' data privacy. PageSense doesn't collect personal data from any website visitor who participates in any experiment. The cookie data used to map experiments isn't associated with any IP address.
Technical Cookies
In order to use this website we use the following technically required cookies
Cloudflare
For perfomance reasons we use Cloudflare as a CDN network. This saves a cookie "__cfduid" to apply security settings on a per-client basis. This cookie is strictly necessary for Cloudflare's security features and cannot be turned off.
Youtube
We embed videos from our official YouTube channel using YouTube’s privacy-enhanced mode. This mode may set cookies on your computer once you click on the YouTube video player, but YouTube will not store personally-identifiable cookie information for playbacks of embedded videos using the privacy-enhanced mode.
Google Tag Manager
We track anonymized user information to improve our website.
Active Campaign
This website uses ActiveCampaign (AC) as the designated CRM to track user interaction (trough trackcmp.net) AC cookies are necessaries but no IP or personal data will be saved if you don't convert on one of our forms (cookie visitorEmailAC). We use this to better understand how people interact with our site and to see their journey through the website.
bigrep.com (language)
Contains the current language of the admin and the user.
bigrep.com (Authentification)
Cookie required to allow a user to stay logged in to a web site without needing to submit their username and password for each page visited. Without this cookie, a user is unable to proceed to areas of the web site that require authenticated access.
bigrep.com (session)
These cookies are set by WordPress are used for indication and identification of the logged in user. Those are session cookies.
These cookies allow us to count visits and traffic sources, so we can measure and improve the performance of our site.
PageSense Session Recording
PageSense lets us record visitor interaction with our website in order to improve our services. All IPs are anonymized, no keystrokes are recorded.
These cookies are set through our site by our advertising partners.
Leadinfo
To measure B2B use of our website, we use the Leadinfo solution based in Capelle aan den IJssel. This service shows us company names and addresses based on the IP addresses of our visitors. The IP address is not stored after use.
Bing
We use Bings Ads to promote our company online and use the cookies provided by Bing to record completion of a transaction on our website. You can find out more about Bing cookies by visiting this site: https://advertise.bingads.microsoft.com/en-gb/resources/policies/microsoft-bing-ads-privacy-policy
Decline all Services
Accept all Services