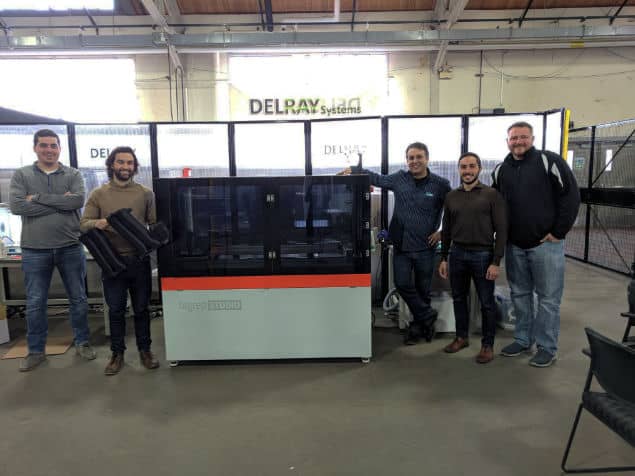 In knowing what Mid-West manufacturers need to gain a competitive edge, DELRAY Systems is in arguably the best position possible. Its Founder Joe Rocca’s was himself an early adopter in the 3D printing industry and knows how important it is to be leading the field with the latest additive manufacturing technology.

“Since 1996, technology has changed substantially,” said Rocca, reflecting on the time he moved into the 3D printing sphere. “3D printing machines were very expensive back then.” Not only has the industry technology changed; so too has the way companies do business and the applications they need to maintain a competitive edge.

From their spot in Detroit, Michigan, Rocca’s team is also in a great position to witness cutting-edge innovations and reflect on the rich, world-famous history of manufacturing in their town. They’re currently located in one of the original Dodge family buildings from the early 1900s, on the Oakland University Campus. The facility is a business and R&D center for clean energy, hybrid/electric and autonomous vehicle development utilizing advanced manufacturing processes including big 3D printers.

Synonymous with the glory days of the US automotive industry, Detroit is a city that has undergone immense change and hardship. Although infamous for a plunge in car sales during the 2008 recession, and the significant subsequent layoffs by Michigan automakers, Detroit is back on top in a big, yet very different way.

Despite challenges that the city’s automakers have faced, Rocca says it didn’t have much of an impact on the continuation and growth of the 3D printing industry. “Even though car companies may have struggled selling vehicles, we were somewhat isolated from that in a sense… the future vehicle product development process and the need to verify design intent has always been there.”

Given this fact, Rocca still felt confident in starting DELRAY Systems. Developing a substantial team of professionals has always been part of his DNA. So, when his employer decided to sell its 3D printing business, it was the perfect time for him to open his own operation. The three main components at DELRAY Systems are 3D printing, 3D scanning, and 3D modelling.

Selecting “best in class” professional desktop 3D printers, DELRAY Systems soon tapped into the pulse of the many industries in the Mid-West and across the country. “We also wanted a large-format 3D printer in our offerings, and so we kept an eye on the industry, and zeroed in on BigRep after seeing the technology at AMUG.”

Rocca knew BigRep America President Frank Marangell from his days working with other 3D printing companies, so it was an easy mutual decision to partner up in a reseller capacity.

“DELRAY Systems is certainly an asset to our growing reseller network,” said Marangell of the newly minted BigRep reseller. “With their position in the Mid-West, impeccable knowledge and experience in 3D printing, and breadth of industries covered, it introduces BigRep to an even wider audience.”

For DELRAY, and now consequently BigRep, there is an exciting opportunity ahead in a fast-growing market in this part of the United States. Many consumer products are being developed in their area – from vacuum cleaners, to furniture, and yes, automotive is certainly one segment of it. Though with opportunities, come challenges in terms of educating on applications and potential.

“Sometimes people are a bit fearful that the 3D printing technology is going to eliminate their jobs,” said Rocca, “But these are the same people who, if they embrace the technology, can fully exploit its capabilities.”

As far as customer service goes, DELRAY Systems has very large companies among its customers, as well as small ‘Mom and Pop’ shops. But no matter how large or small, customer service is the priority and the most important segment of his operation.

“Here in this town, we have very large automotive companies, but believe it or not, they have not implemented the technology as much as one would think,” he says. DELRAY and BigRep are excited to flip that, and together prove the potential for large-scale 3D printing technology.