You’ve heard of southern charm, right? Well, accents rarely come more charming than the Alabamian lilt, and not many 3D printer outlets come with as much experience as SWIGRO. As long-time BigRep resellers – in fact, among the first onboard in the US for BigRep – SWIGRO offers the full suite of BigRep products and a wide array of services in the Alabama state and region. “We consult to customers, to help them find the most effective applications with their machines,” said Founder and CEO, Renato Gross.

Originally hailing from the German-speaking part of Switzerland, but having grown up in Brazil and ultimately settled in Alabama, Gross brings a vast number of experiences – not to mention languages – to the table. It’s little wonder that he has a special appreciation for the German engineering that so uniquely characterizes BigRep large-scale 3D printers, like the BigRep ONE.

Gross founded the Auburn-based company after a long-time role as VP & General Manager at Cumberland Plastic Solutions. He brings with him a specialized knowledge surrounding 3D printing for industrial applications, particularly in injection molding. He has worked to provide solutions to businesses in the automotive and consumer (i.e. lawn and garden) industries. Thus owning and operating his business amid industrial giants in Alabama is a great fit.

In this southeastern corridor of the United States, and in Alabama specifically, there is an abundance of traditional industry. “As soon as Mercedes Benz moved in, it really changed things,” said Gross. “Alabama is a big industry state, so there are a lot of opportunities for 3D printing here.” 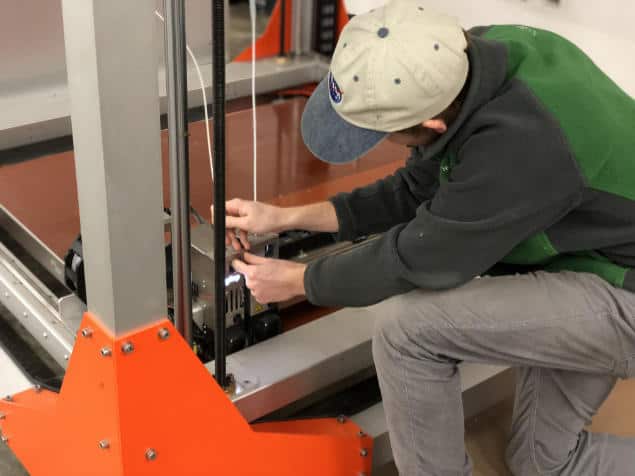 SWIGRO's employee working with the BigRep ONE

The automotive sector has a particularly strong presence in the region, which BigRep Channel Manager Ryan Hayford echoes, saying that the Southeast is where most of the US automobile manufacturing is done, putting a reseller like SWIGRO in a good position to bring value to companies in the region using BigRep technology. “Large prototypes for testing, large tooling, jigs and fixtures are particularly valuable applications, where 3D printing is concerned,” said Hayford. “Aerospace design and manufacturing is a feature of the industrial landscape in the southeastern states, in Alabama, Florida and Georgia, for example.”

While a number of big players in the region have begun using 3D printing to their advantage, a recent event series bringing together interested companies was a way to showcase the potential applications that 3D printing brings for an array of industries. SWIGRO and BigRep featured in the recent Lunch & Learn events held in Decatur and Birmingham on the 24th and 25th of January respectively, which were co-hosted by the AlabamaGermany Partnership (AGP) and the Alabama Automotive Manufacturers Association (AAMA).

The events were a chance for companies to explore opportunities in additive manufacturing for prototype production, such as those looking to shorten, and lower costs involved in their product development cycles, and to empower advanced in-house tooling for various in process applications. BigRep and SWIGRO teamed up to introduce a range of industrial 3D printing applications overviews and case studies for the BigRep STUDIO 3D printer.

“I’d say the strongest point of interest [among participants] was in terms of size, cost and versatility in printing a wide range of resolutions,” said Gross of the educational event series.

While they largely focus on helping industrial companies find 3D printing solutions to their business challenges, as well as all technical support and training, SWIGRO has also done some zanier things in their time to show the potential of 3D printing and have a little fun with it. In May 2016, SWIGRO teamed up with major discount coupon platform Groupon to offer a life-sized 3D model of one’s self.

“Groupon called us and asked if we could do it, technically,” said Gross. “And we said, ‘Of course, we’ve already done it!’” It had a hefty price tag, yes, but it was an inspired Mother’s Day gift idea to say the least, and the news was covered by the New York Times and Newsweek, among others. Though at $30,000 or so a-piece, customers are probably better off saving a few more pennies to buy the large-scale 3D printer itself!