Klöckner & Co has invested in technology startup BigRep via its venture capital subsidiary kloeckner.v. Klöckner & Co’s upfront investment before the conclusion of the ongoing international Series B financing round for BigRep GmbH marks its entry into the future market of additive manufacturing. BigRep designs and produces the world’s largest 3D printer and provides consulting for additive manufacturing system solutions. Alongside the financial investment, Klöckner & Co plans to use BigRep’s industrial 3D printers in its extensive European and US site network going forward. This market segment has a promising outlook, with an annual growth rate of around 20 percent expected by 2020.

“The systematic emphases of our Klöckner & Co 2020 strategy are digitalizing the supply and value chain as well as boosting higher value-added products and services,” says Gisbert Rühl, Chairman of the Management Board of Klöckner & Co SE. “Our investment in BigRep targets both elements of the strategy, paving the way to our participation in a highly promising growth market.”

“We expect digitalization to radically alter traditional value chains,” says René Gurka, CEO of BigRep GmbH. “Together with Klöckner & Co – the pioneer of digitalization in the steel industry – as our strategic partner, we aim to exploit this trend as we move forward.”

About Klöckner & Co:
Klöckner & Co is one of the largest producer-independent distributors of steel and metal products and one of the leading steel service center companies worldwide. Based on its distribution and service network of around 190 locations in 13 countries, the Group supplies more than 130,000 customers. In addition to companies in the construction industry as well as machinery and mechanical engineering, Klöckner & Co serves customers in the automotive and chemical industry, in shipbuilding and in fields of household appliances, consumer goods and energy. Currently Klöckner & Co has around 9,100 employees. The Group had sales of around €5.7 billion in fiscal 2016.

About BigRep:
BigRep is a tech startup headquartered in Berlin with offices in New York and Singapore. The pioneering developments of the company founded in 2014 include BigRep ONE, which is complemented by the smaller BigRep STUDIO. BigRep’s multinational team has since grown to over 60 employees with interdisciplinary expertise and in-depth experience in additive manufacturing. As well as new products, the company based in Berlin’s Kreuzberg district today focuses on end-to-end solutions for industrial customers in the form of integrated additive manufacturing systems. One example is the TNO project, which was launched in fall 2016. The highly innovative engineering enterprise aims to revolutionize design, prototyping and industrial production worldwide from the ground up. BigRep’s goal is to become a leading global supplier of additive manufacturing systems within the next five years.

For further information as well as pictures and video material please contact: 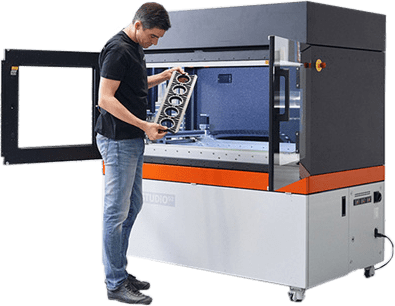 Necessary Analytics Marketing Privacy Policy Cookie Policy
These cookies are necessary for the website to function and cannot be switched off in our systems.
Technical Cookies
In order to use this website we use the following technically required cookies
Cloudflare
For perfomance reasons we use Cloudflare as a CDN network. This saves a cookie "__cfduid" to apply security settings on a per-client basis. This cookie is strictly necessary for Cloudflare's security features and cannot be turned off.
Youtube
We embed videos from our official YouTube channel using YouTube’s privacy-enhanced mode. This mode may set cookies on your computer once you click on the YouTube video player, but YouTube will not store personally-identifiable cookie information for playbacks of embedded videos using the privacy-enhanced mode.
Active Campaign
This website uses ActiveCampaign (AC) as the designated CRM to track user interaction (trough trackcmp.net) AC cookies are necessaries but no IP or personal data will be saved if you don't convert on one of our forms (cookie visitorEmailAC). We use this to better understand how people interact with our site and to see their journey through the website.
bigrep.com (language)
Contains the current language of the admin and the user.
bigrep.com (Authentification)
Cookie required to allow a user to stay logged in to a web site without needing to submit their username and password for each page visited. Without this cookie, a user is unable to proceed to areas of the web site that require authenticated access.
bigrep.com (session)
These cookies are set by WordPress are used for indication and identification of the logged in user. Those are session cookies.
These cookies allow us to count visits and traffic sources, so we can measure and improve the performance of our site.
Google Tag Manager
We track anonymized user information to improve our website.
These cookies are set through our site by our advertising partners.
Hot Jar
We use HotJar to track what users click on and engage with on this site
Bing
We use Bings Ads to promote our company online and use the cookies provided by Bing to record completion of a transaction on our website. You can find out more about Bing cookies by visiting this site: https://advertise.bingads.microsoft.com/en-gb/resources/policies/microsoft-bing-ads-privacy-policy
Decline all Services
Accept all Services