Behind every firefighting team that responds to emergencies and fires, there is a fire engine, and behind every fire engine, there is a team of engineers working hard to deliver the safest and best-performing vehicles and features. That is precisely where Magirus comes in. The Germany-based company was founded in 1864 by firefighter Conrad Dietrich Magirus with the aim of pioneering state-of-the-art firefighting vehicles and products. Today, over 150 years later, large-format 3D printing is helping the company to continue this mission and move fire safety & disaster control solutions into the future.

3D printing is not wholly new to Magirus. The company, which supplies a large range of fire fighting vehicles, turntable ladders, equipment and equipment wagons, special solutions, pumps and
portable pumps, has been using the technology since 2015 to enhance its prototyping and product development. Like most 3D printing adopters, Magirus initially worked in collaboration with external 3D printing service providers. In 2018, however, as the demand for large-scale prototypes increased, the company decided to invest in its own in-house 3D printer, the BigRep ONE.

Since then, 3D printing has become an integral part of Magirus' prototyping and product development workflows, especially for the production of aesthetic and ergonomic fire engine parts measuring more than 300 mm in length. Magirus' Chief Engineer in Prototyping Jens Krämer and his team frequently use the BigRep ONE to 3D print functional prototypes, which can be fitted and tested on trucks in order to validate the part design before moving ahead with tooling and production.

"Before 3D printing, prototyping was very expensive," Krämer states, explaining that his team used to rely on hand lamination and milling processes—both of which are time consuming and costly—to produce prototypes before moving ahead to final tooling.

With 3D printing added to the prototyping workflow, the Magirus team has not only dramatically reduced its prototyping costs (from nearly a hundred-thousand euros to just thousands of euros), it has also achieved much faster part development lead times. "It used to take from 3-6 months, depending on the size and capacity of the prototyping workshop, now it's a matter of the printing time on the machine, so just a couple of days," Krämer says.

The time and cost savings afforded to Magirus' prototyping department by 3D printing have also enabled more agile part development, which helps the company to meet the needs of its firefighter clients. In other words, large-scale 3D printing allows Magirus to rapidly manufacture and validate prototypes, which in turn enables it to update and improve its fire engines and firefighting solutions based on customer feedback.

While Magirus' main use for its in-house BigRep ONE 3D printer is prototyping, the fire engine manufacturer is also starting to explore the use of the technology for small-series production. In fact, the company's first 3D printed end-use part is now undergoing the final stages of validation for use aboard fire trucks.

The part in question is a window frame for a fire engine crew cab door. The crew cab is a fire truck designed to carry at least nine crew members. As one can imagine, it is important for the firefighters to have as much visibility as possible from the cabin as they approach the fire or emergency scene they have been called to. Magirus was thus asked by its firefighter customers if it could install an additional window into the frame of the crew cab door to improve visibility from inside.

In developing the window, the Magirus team used the BigRep ONE to 3D print a prototype of the frame—a structural element designed to connect the outer shell of the door to its inner side. The quality of the prototype window frame was ultimately so satisfactory that the team decided to forego tooling altogether and 3D print the end-use component. The production part, which measures roughly 800 x 600 x 150 mm, was 3D printed using a higher resolution than the initial prototype and was made from a high-temperature carbon fiber reinforced polymer, HI-TEMP CF.

"Because the volumes are low, we have started pre-series production for the [window frame]," says Harald Fitz, Chief Engineer of Firefighting Standard Vehicles at Magirus. "What we are also doing is testing and validation because the part has to be rigid and withstand the circumstances where firefighters are using their trucks… This is ongoing at the moment, but we are confident that the part will withstand all the testing we are applying." The 3D printed window frame is being tested for vibration, impact, and heat deflection temperature, among other things.

By leveraging 3D printing for the crew cabin window frame, Magirus not only benefited from faster and more cost-effective prototyping, it has translated these benefits to end-use production. Most importantly, it has found a way to address and meet the requests of its customers, who rely on the company's products and systems to save lives.

Vital to Magirus' successful use of 3D printing—both for prototyping and now end-use production—is the BigRep ONE 3D printer. Manufactured by Berlin-based BigRep, the BigRep ONE is a large-format industrial 3D printer that has an install base of over 400 systems globally.

The system is characterized by its massive build volume, totaling one cubic meter, and its compatibility with several polymer filaments, including PLA, TPU, PETG, and HI-TEMP CF, an engineering-grade biopolymer reinforced with carbon fiber. The BigRep ONE also integrates two BigRep Power Extruders with interchangeable nozzle sizes, facilitating multi-material printing or the use of water-soluble supports.

For Magirus, the size and industrial capability of the BigRep ONE were big draws. Not only is the machine suitable for manufacturing the large-scale prototypes the company requires for its fire trucks, but it also can be used to produce several smaller components—such as the window frame—in a single batch. The adjustable 3D printer settings, such as resolution, also allow the company to rapidly manufacture prototypes at a lower resolution and enhance the print quality for end-use parts.

"As you can imagine with the size of our vehicles, the parts [we needed] were getting bigger," says Krämer. "After a final evaluation, we decided to purchase the BigRep ONE. Firefighting vehicles are the ideal product of 3D printing due to the amount of vehicles produced and because high customization and individualization—and even digitalization—require quick and fast solutions."

"I'm quite confident that we could increase the quantity of parts being produced by the BigRep ONE 3D printer," Fitz adds. "Starting from prototyping, and now having the first part produced in a small series, I could really imagine that for special cases or for special parts we could move completely to 3D printing. The BigRep ONE 3D printer is really suitable for that."

In other words, this is just the beginning of production 3D printing for Magirus. 3D printing technology has the potential to open up increasing opportunities for custom and low-volume parts for fire engine manufacturing applications. Who knows, the next Magirus fire truck you see could be fitted with a 3D printed component! 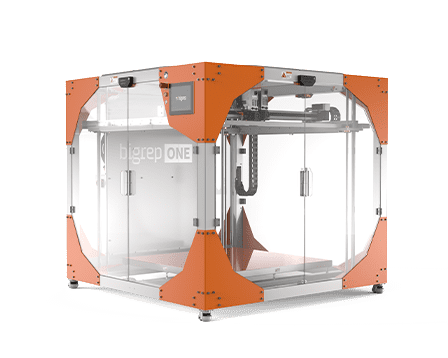