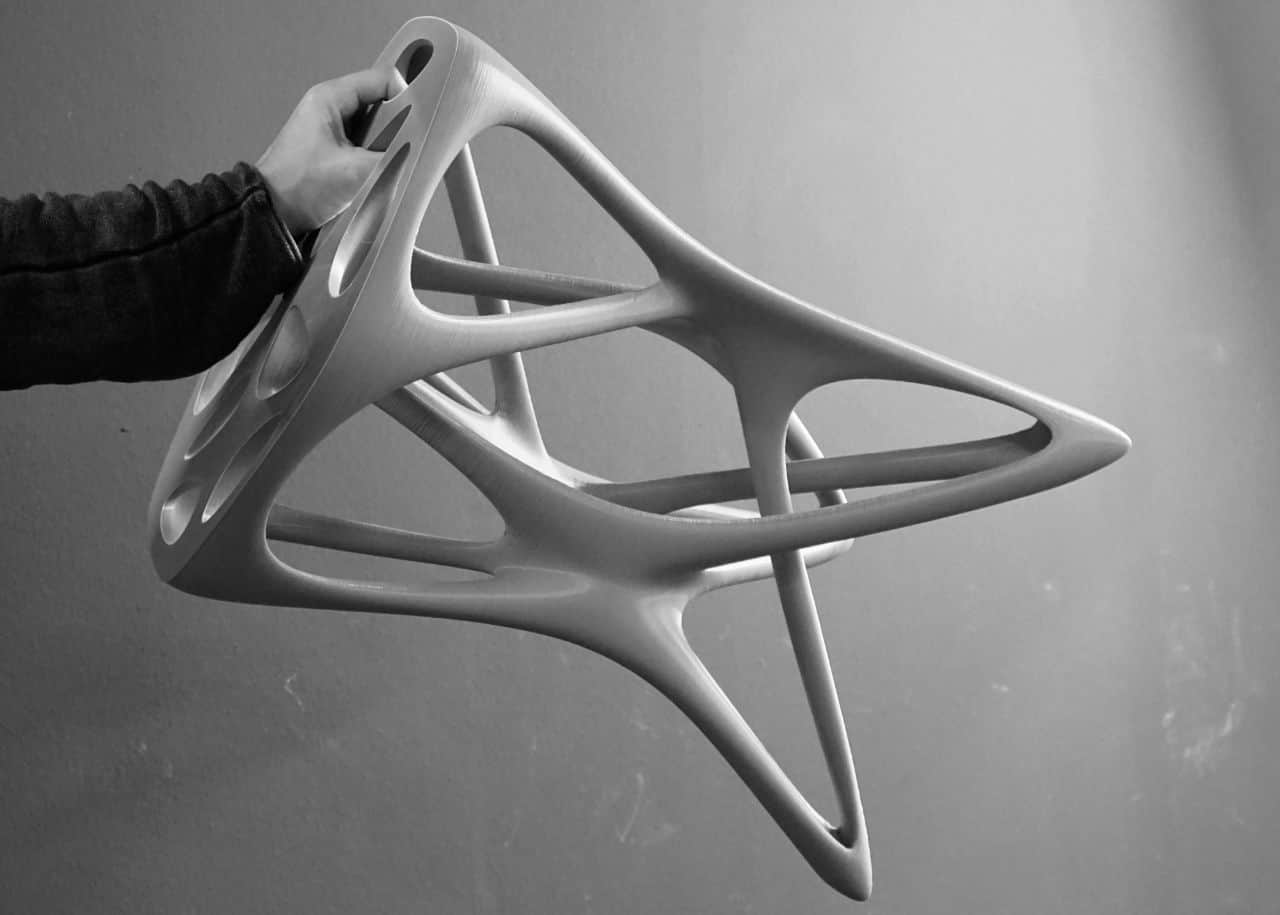 With a deadline of 11 February, creative young Canadians have just under a month left to submit their innovative 3D-printed chair designs for the BigRep Innovation Award. Over the final weeks we will be interviewing three inspirational design professionals, all 3D printing experts, to spark the creativity and guide the efforts of our competitors on the way towards the finish line.

For the first in the series we sat down with Marco Mattia Cristofori, Product Designer at BigRep, to talk about his latest design, the Terra Stool, which is printed on a BigRep ONE. Marco explains how he developed this intriguing, head-turning piece and gives some handy hints on how best to approach the process of furniture design for production on a BigRep large-format printer.

Could you tell us a bit about your background and experience as a designer?

As an architect who decided to focus on smaller-scale designs, working as a Product Designer at BigRep has opened up new creative possibilities for me. When I started here large 3D prints seemed complex and time consuming to produce, but I discovered that the reality is very different. On our printers you can produce literally whatever you want, only your creativity is the limit and the day after you make a design, you have a prototype. The extra options the printers give me inspire me to move in new directions.

Regarding my background, I’m originally from Italy, and during my formation process I had the chance to live in Spain, the UK, Turkey and before moving to Germany. I worked for two years in an architecture studio based in Istanbul, where I was involved in projects on different scales – from urban planning to furniture design. I discovered that what fascinates me most is designing items for individual use in specific situations, like for sleeping, eating or, in this case, sitting!

How did you approach designing this stool for large-scale 3D printing?

The inspiration for this design was the Ocke Stool which is a really impressive design by Beatrice Müller, a former Product Designer at BigRep. I wanted to re-work the concept in a way which let me experiment with new design ideas and explore what the BigRep machine is capable of. To direct myself I set two constraints: to avoid using any support structure, and to exploit the flexibility of the ‘layer-by-layer’ process of FDM by making every single layer in the design different. An early decision after setting these rules was to have the seat rooted to the print bed which would make avoiding using support structure easier. 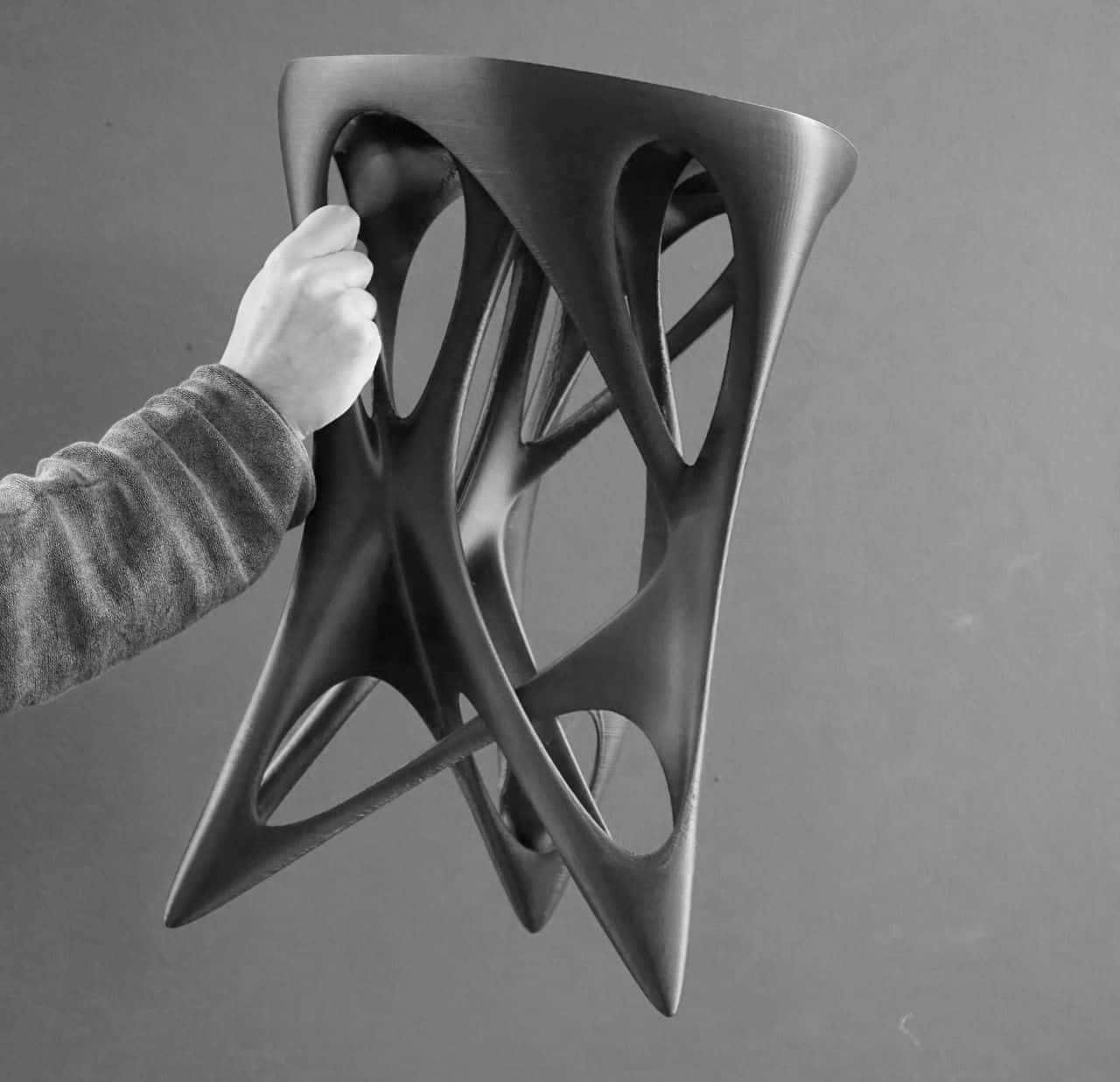 The Terra Stool was designed by Marco Mattia Cristofori. Each 3D-printed layer of the stool has a unique shape

How to submit your design

Your re-designed stool draws upon natural design/bionic principles? What’s the thinking behind this?

I decided to use a bionic shape partly because organic shapes tend to vary constantly in their cross-section so this would fit my aim to avoid layer repetition. The beautiful thing is that this typology of design helps to improving the stool’s strength. The gradual curvature of the supporting sections enables this by giving a load applied to the top of the stool an easy path through the object. The sharp angles on rectilinear designs can be weak points which are less able to deal with such forces.

An engineer at BigRep, Paul Worms, showed me some studies and images explaining these bionic principles. If you just look at the way the trunks of trees emerge from the earth, and branches emerge from the trunk, you clearly see this idea of the gradual curvature of structural sections.

What material did you use for this design? What features our Canadian entrants look for when choosing a material?

I chose our most-used 3D printer filament PLA, which allowed a nice polished finish to the seat top when it is printed flat on the print bed. It also meant that I had to limit overhang angles in the design to a maximum of 60 degrees in order to meet my rule of not adding any support material.

I suggest Innovation Award competitors think about other options. For example, it can be nice to use dual extrusion to combine two materials for a new effect, as in [sg_popup id="44" event="click"]this table[/sg_popup] BigRep produced in 2017. In that design we used on of our transparent materials which can produce interesting outcomes, especially if you experiment with infill pattern. Our PRO HT filament is a high-performance ABS-like material, its tensile and impact strength properties open up additional design possibilities.

As a designer, what news sources, blogs or publications do you devour for inspiration and industry news?

I still keep up to date with new developments in architectural design, I really like ArchDaily. I find that I can be inspired by ideas expressed in architectural language, and it influences my product designs. I also really like Dezeen which is more design-focused. And then there is iGNANT! I discovered this around six years ago and it’s a super nice, simple blog that covers different creative media. They’re from Berlin and posted this piece on our colleagues at NOWlab, which is actually about some nature-inspired furniture.

What advice would you give a Canadian student preparing a designs for the February 11 BigRep Innovation Award deadline?

I could talk for hours on this … but let me just say three things. The more research you can do into ideas which inspire you and into 3D printing technology the more likely you can create a really strong, boundary-pushing concept. Also, I would definitely recommend you set some rules for your design and make some quick decisions early on to take some pressure off the process and give a clear direction to your creativity. And the most important thing? Manage your time from there so that you have time to produce a design that expresses your unique perspective, in plenty of time for submission before 11 February!

More information about the Innovation Award, including entry requirements and student resources, can be found HERE.

Connect with Marco on Linkedin HERE.